On Thursday, September 16, THT and Neighbors Together present a free outdoor show at Middlebury’s Marble Works. Starting at 6pm, enjoy the debut performance of the Almendros, and their album “All Over the Place,” produced by The Grift’s Clint Bierman.

As the title “All Over the Place” suggests, the songs are a lively mix of styles, from rock and country-rock to reggae, ska and world music influences. Vocals are shared among Ryan, Pelletier, Liz Cleveland of Middlebury and Naunau Belu, a Middlebury resident originally from Madagascar.

All the players on “All Over the Place” are veterans of other area bands. Along with bassist Pete Ryan (the Horse Traders, Deb Brisson & the Hay Burners) and guitarists Bierman and Pelletier (Horse Traders and Hay Burners), they include Belu (Gumbo Yaya) on guitar and keyboards, John Wallace of Cornwall (Horse Traders, Hay Burners and other groups) on drums, Doug Wilhelm of Weybridge (Hay Burners and Avant-Garde Dogs) on congas, harmonica and percussion, and Cleveland (LC Jazz and Avant-Garde Dogs) on vocals. Joining the group on trumpet and vocals for the Sept. 16 show is Kemi Fuentes-George.

This show is FREE thanks to a grant from Neighbors Together. 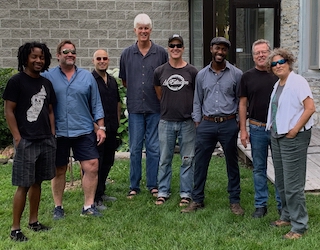