The circus is coming! The circus is coming! Bread and Puppet Theatre’s Our Domestic Resurrection Circus, that is. On Wednesday, July 21 and Friday, September 3, Town Hall Theater and Middlebury Underground are pleased to present this Bread & Puppet production outdoors at Marble Works Riverfront Park. Our Domestic Resurrection Circus is a brand new show in the tradition of the iconic Bread & Puppet Circuses that began at Goddard College in Plainfield, Vermont in 1970.

This year’s show in Middlebury will draw on traditional circus tropes and familiar Bread and Puppet iconography to draw attention to the urgent issues of the day. Stilt dancers, paper maché beasts of all sizes and a riotous brass band make a raucous, colorful spectacle of protest and celebration.

“We celebrate the 50th anniversary of Our Domestic Resurrection Circus,” says director Peter Schumann. The show, says Schumann, is “in response to our totally unresurrected capitalist situation, not only the hundreds of thousands of unnecessarily sacrificed pandemic victims but our culture’s unwillingness to recognize Mother Earth’s revolt against our civilization. Since we earthlings do not live up to our earthling obligations, we need resurrection circuses to yell against our own stupidity.”

After the show, Bread and Puppet will serve its famous sourdough rye bread with aioli, and Bread and Puppet’s “Cheap Art” – books, posters, postcards, pamphlets and banners from the Bread and Puppet Press – will be for sale. All ticket proceeds benefit Bread and Puppet Theater and Town Hall Theater. Tickets are $20 and for sale via townhalltheater.org or by calling the box office at 382-9222. Bring chairs, picnics, and a sense of humor.

Bread and Puppet will perform through a light rain, pause a performance and play band tunes to keep spirits up if heavy rain comes, and end a show prematurely if heavy rain persists. If consistent heavy rain is forecasted for the scheduled time of a performance, there may be a venue change or cancellation. In such a case, THT will notify all ticket holders by 12 p.m. the day of the show and all ticket holders will be invited to transfer their ticket to another upcoming show, availability allowing, or request a refund. 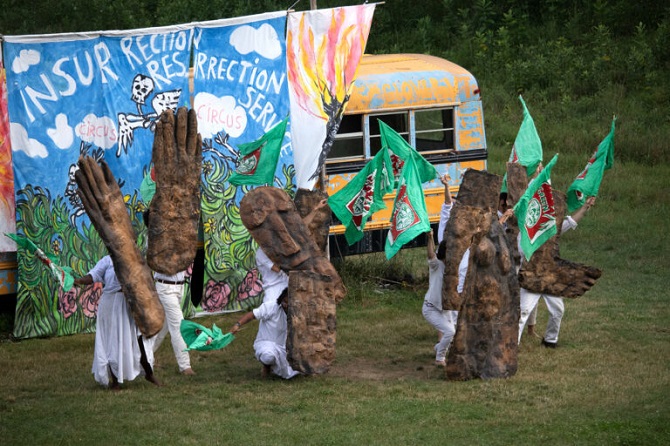