Talk: The Devil’s Cabinet: The Eddy Family of Spirit Mediums

The Sheldon Museum presents “The Devil’s Cabinet: The Eddy Family of Spirit Mediums,” a talk by Jason Smiley about the Eddy family of Chittenden, Vermont (Rutland County). Free with Museum admission. Space is limited, advance reservations are recommended by calling 802-388-2117.

During the mid to late 1800s, the Eddys became world-renowned as spirit mediums with the alleged ability to generate full-bodied spirit manifestations or “materializations” of the departed.  People traveled from all over the world to Chittenden to witness these phenomena for themselves. Some came with the hope of seeing and speaking to their own departed family members. Others came as skeptics, hoping to debunk the family’s alleged powers as “humbug”. By 1874, the family was so well-known that Chittenden started being referred to as “Spirit Vale”. To this day, there are many who believe that the family had genuine supernatural abilities. The family and the story has ties to P.T. Barnum, Mark Twain, Sir Arthur Conan Doyle, Harry Houdini, Queen Victoria, and President Lincoln.

Jason is a graduate of Champlain College and works full-time in Burlington as a Compliance Coordinator for Dealer.com (part of Cox Automotive). Jason was born and raised in Vermont and has been researching the Eddy family for over a decade. He plans to release a book containing his research in late 2019 or early 2020.

The talk is part of the programming offered by the Sheldon Museum in conjunction with the Museum’s exhibit “Conjuring the Dead: Spirit Art in the Age of Radical Reform.” 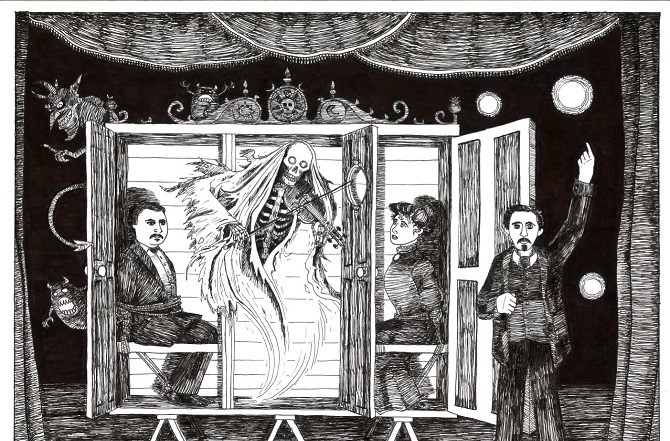