The Ladies of the Camellias

This hilarious farce imagines a meeting in Paris, 1897 between the most famous and temperamental divas of the age, Sarah Bernhardt and Eleonora Duse. The two actresses are scheduled to perform back-to-back productions of the play The Lady of the Camellias by Alexandre Dumas at Bernhardt’s theater. Their leading men, Dumas, and the theater manager wait nervously, expecting huge fireworks between the two grand dames when they finally leave their dressing rooms and meet on stage for the first time. Into this tense situation comes Ivan, a young Russian anarchist who takes the two divas hostage and threatens to blow up everyone in the theater unless his comrades are released from prison.

Bernhardt and Duse must work together, using every trick and technique they have developed during a lifetime in the theater to defeat the heavily armed Ivan. Yet, even though their lives are in peril, they still can’t resist playing games of one-upmanship with each other. Amazingly, Ivan is able to see through their performances, raising suspicions that he is more than a mere anarchist. He seems to know an awful lot about theater. Could it be that he is really that most feared of theatrical persons: a would-be director?

While the meeting between Bernhardt and Duse is pure fantasy; the setting, as well as the thoughts and ideas expressed by the ladies in question, are not. The playwright, Lillian Groag, has carefully researched memoirs, diaries, letters, and reviews by their contemporaries to create a vivid and real portrait of two extraordinary women.

Bernhardt and Duse were among the last of the great actor-managers, and they made themselves stars. In an era with no mass media their names were known around the world. The Ladies of the Camellias is a salute to a meeting that Robert de Montesquiou described as “more of a collision than an embrace.” 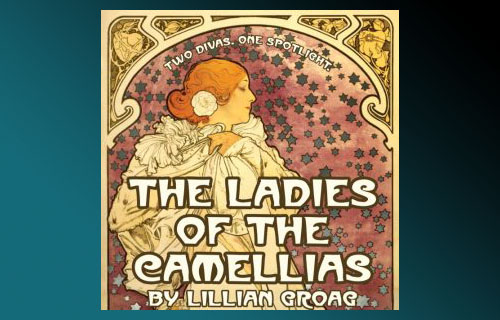