The Showing Up Workshop

Be part of the development of a new musical!

A FIRST LOOK AT A NEW MUSICAL BY LOCAL WRITER-ACTORS

Growing up in small-town Vermont, Miranda and Vanessa starred in high school musicals and dreamed of making it to Broadway.  Life took them through New York stages, success and disappointment, the loss of old dreams and the creation of new ones.  And through it all their friendship endured.

Now they’re returning to their hometown to work with Doug Anderson, artistic director of Town Hall Theater, on a new musical that tells their story.

Showing Up is funny, tuneful, and topical.  “The moment I heard some of the songs I knew that this musical has real potential,” says Anderson, “and I had to be part of it.”  Showing Up will have its world premiere at Town Hall Theater in March, but the development of a new musical is a long, intensive process, and local audiences are invited to be part of it.  The first draft of the show will be presented at THT on November 22 & 24, with the world premiere in March, 2020.  Miranda and Vanessa will perform with a live band, under the direction of Simon Broucke.

After the performance, free food and drink will be served and audience will be asked to respond to the experience. Audience input will play a large role in the creation of the script for the world premiere in March.

The Showing Up Workshop 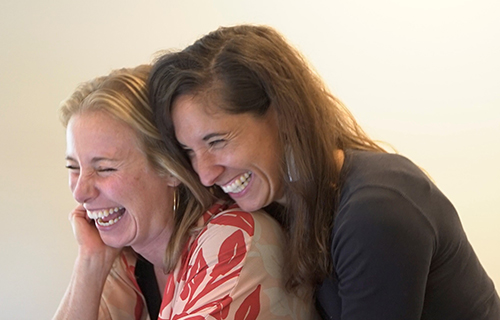